Many conservative treatments of cancer like chemotherapy, surgery, and radiation have failed to eliminate lung cancer completely. In a report by World Health Organisation (WHO), dated 12 September 2018, it was observed that approximately1.8 million deaths happened due to Lung cancer that year which is the largest number as compared to other cancers! Henceforth it won’t be wrong to say that lung cancer is the deadliest cancer. Moreover lung cancer has been observed to be the 2nd most common cancer in both men and women and about 13% of all new cancers are lung cancers and trust me, a share of 13% amongst all cancers is a huge share. Lung cancer is the leading cause of cancer death among both men and women. Each year, more people die of lung cancer than of colon, breast, and prostate combined. Overall the chance that man will develop lung cancer in his lifetime is about 1 in 15 while for a woman; the risk is 1 in 17. These numbers include both smokers and non – smokers.

In the pursuit to fight cancer, researchers have discovered Tocotrienol which is supposed to demonstrate anti-cancer activities. A number of studies have been conducted over Annatto based Tocotrienol (DeltaGold – Eannatto). Several studies have been conducted on Tocotrienol for its effects against lung cancer like ‘Delta-Tocotrienol inhibits non-small lung cancer cell invasion via the inhibition of NF-kb, uPA activator, and MMP-9’, where it was observed that Delta-Tocotrienol attenuated tumor invasion and metastasis by the repression of MMP-9/uPA via downregulation of Notch-1 and NF-kB pathways and upregulation of miR-451, another study, ‘Tocotrienol – rich mixture inhibits cell proliferation and induces apoptosis vie down – regulation of the Notch – 1/NF – kB pathway in NSCLC cells’ in which the anticancer property, “inhibition of cell proliferation” of Tocotrienols was observed.

Non – small cell lung cancer (NSCLC) accounts for 85% of all lung cancer cell and can be classified into 3 sub – type’s squamous cell carcinoma, large cell carcinoma, and adrenocarcinoma. The initial stage of NSCLC has a 5 year survival rate of 55% but this rate reduces to less than 4% for cases diagnosed with remote metastasis. Matrix metalloproteinase 9 (MMP – 9) is an enzyme with 21 subtypes in humans which regulates cell migration, angiogenesis, adhesion, aggregation, and immune response in cancer. In this process, MMP – 9 is mainly accountable for humiliating collagen type 4 and elastin in basal membranes, facilitating lung cancer metastasis. High levels of MMP – 9 have also been reported in the serum of lung carcinoma patients. Thus, the modulation of MMP – 9 protein expressions and their activities would be excellent therapeutic targets for the inhibition of assault and metastasis processes in NSCLC.

Urokinase – type plasminogen activator (uPA), a serine proteinase, binds to the urokinase – type plasminogen activator receptor (uPAR) and transforms inactive plasmin and other protease, including MMP – 9, into their active forms.  Regulating uPA is one of the major approaches that can directly modulate MMP – 9 activities in cancer. Increased expression of the uPA system has been reported in NSCLC tissue as compared to common lung tissue. It has been observed that nuclear factor – kB (NF – kB) a transcription factor (TF) involved in cancer instigation and progression directly binds with the uPA promoter in vitro. The same study showed that the inhibition of Nf – kB activities decreased cell attack and uPA synthesis in NSCLC cells.

Previous studies showed that Delta – Tocotrienol (Eannatto – DetaGold) subdued NF – kB signaling pathways via the down regulation of Notch – 1, thereby decreasing the proliferation and metastatic/invasion potential, while inducing apoptosis of NSCLC cells in a concentration and time – dependent manner. This study investigated the anti – metastatic effect of Delta – Tocotrienol (Eannatto – DeltaGold) on NSCLC cells with the hypothesis that MMP – 9 – dependent invasion and metastasis of NSCLC cells were inhibited by the suppression of Notch – 1 – mediated NF – kB and uPA pathways and induction of miR – 451.

It has been observed that aberrant Notch – 1 expression have been reported in lung cancer patients and could potentially be a beneficial molecular/therapeutic target against NSCLC. Tocotrienols, isomers of Vitamin E, have been shown to exhibit antitumor activity via inhibition of different signaling pathways in tumor cells. This study was conducted on commercially available Tocotrienols (a mixture of isomers) on the Noth – 1 pathway in NSCLC, adenocarcinoma (A549) and squamous cell lung cancer (H520) cell lines. A dose – dependent decline in all growth, cell migration, and tumor invasiveness was observed in both cancer cell lines with the addition of Tocotrienols. A significant induction of apoptosis was also observed using Annexin V stain in flow cytometry analysis.  Since Tocotrienols significantly affected proliferation, apoptosis, migration, and invasiveness, reverse transcription polymerase chain reaction and Western blot analysis were used to explore the molecular mechanisms responsible for the regulations by testing the expression of Notch – 1 and its downstream genes. A dose – dependent decrease in expression of proteins was observed in Notch – 1, Hes – 1, Survivin, and Bcl – XL. In addition, a mechanism was founded linking the NF – kB pathway and Notch – 1 down regulation from Tocotrienols inhibits cell growth, migration, and tumor cell invasiveness via down regulation of Notch – 1 and NF – kB while inducing apoptosis. Hence, these commercially available Tocotrienol – rich mixture could potentially be an effective supplementation for lung cancer prevention. 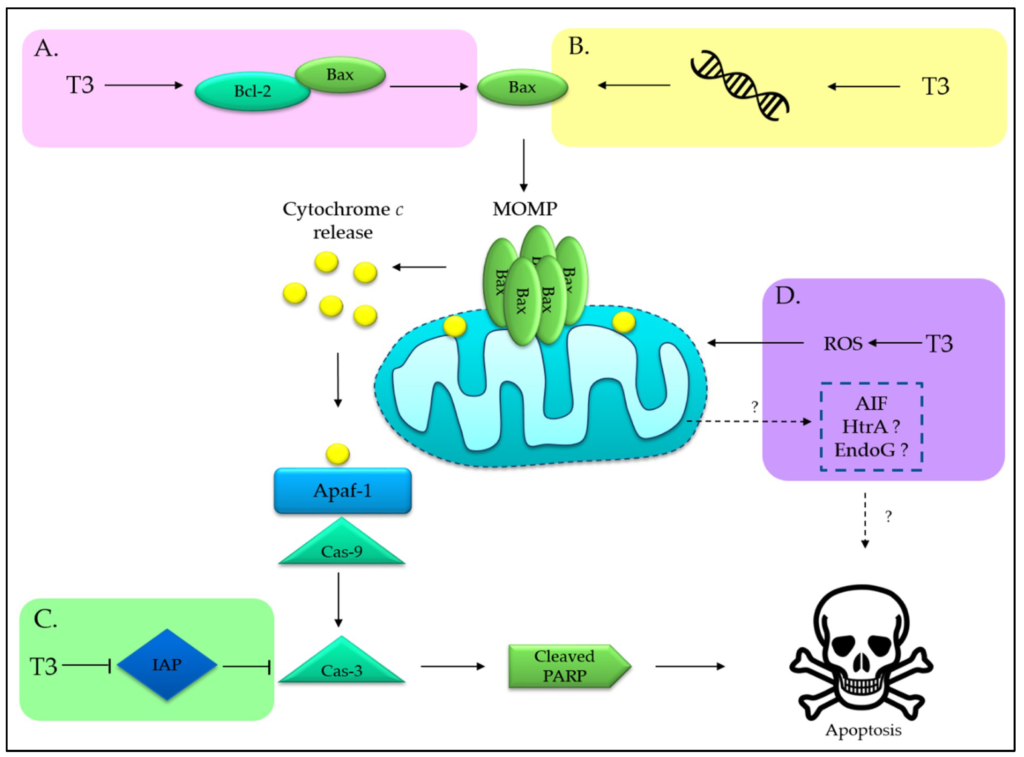 Why Tocotrienol and Not Tocopherol?